Cairo, Egypt, 10 May 2018 – At the Friedrich-Ebert-Stiftung, Mr. Armin Hasemann was feted by staff members to mark the end of his effective 5-years term as the tenth Resident Representative for Friedrich-Ebert-Stiftung Egypt office that was inaugurated in 1976, to contribute in the socio-economic development of Egypt; by promoting areas of pluralism and democracy; supporting economic and social development; contributing to a more sustainable approach towards the environment and natural resources; besides endorsing gender equality and the promotion of human rights. 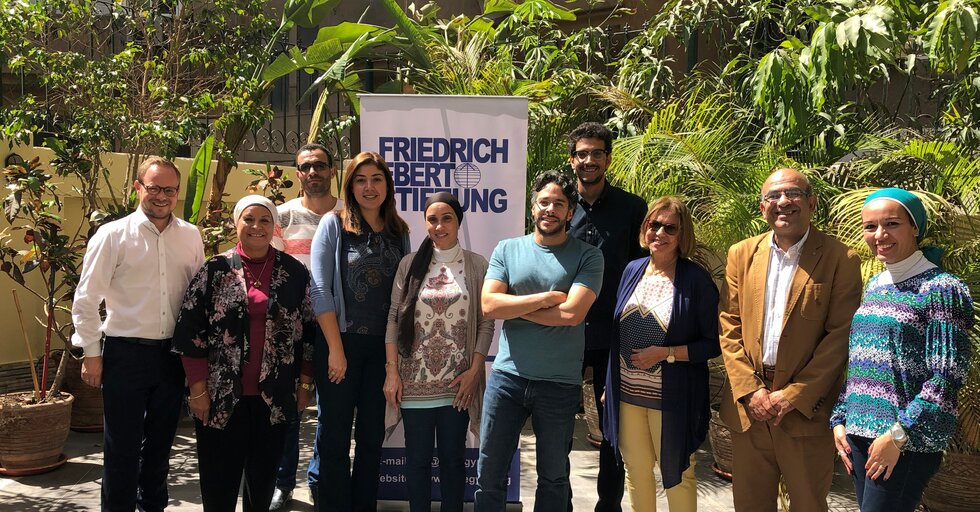 The organization’s staff members gathered to submit a final farewell to Mr. Hasemann, who has always shown leadership and dedicated service during his tenure, wishing him more successful endeavors in Lebanon.

At the same event, Friedrich-Ebert-Stiftung Egypt staff members welcomed Mr. Richard Probst as the new Resident Representative. Mr. Probst is an International development expert with wide ranging of advisory and country office management experience. For most of his international career, he has worked extensively on transformative policies and programs that advanced economic, social and environmental sustainability opportunities, and helped governments to improve inclusive governance and service delivery systems.

Prior to his current appointment, Mr. Probst served in several capacities in the Friedrich-Ebert-Stiftung, including recently as Regional Coordinator of Climate and Energy Program in the MENA region, FES-office Jordan, based in Amman (2014-2018), Project Assistant in the Leadership Development Program of FES-office in Tunis (2012-2014).

Mr. Probst holds distinguished academic records including Double-Master of International Relations and European Integration, University Konstanz (Germany) and Institute of Political Sciences Grenoble (France), scholar in the French-German-Parliamentary-Exchange-Program, Parliamentary Assistant in the French National Assembly, based in Paris, and Carlo-Schmid-Scholar in the Political Section of the EU Delegation in Egypt, based in Cairo.